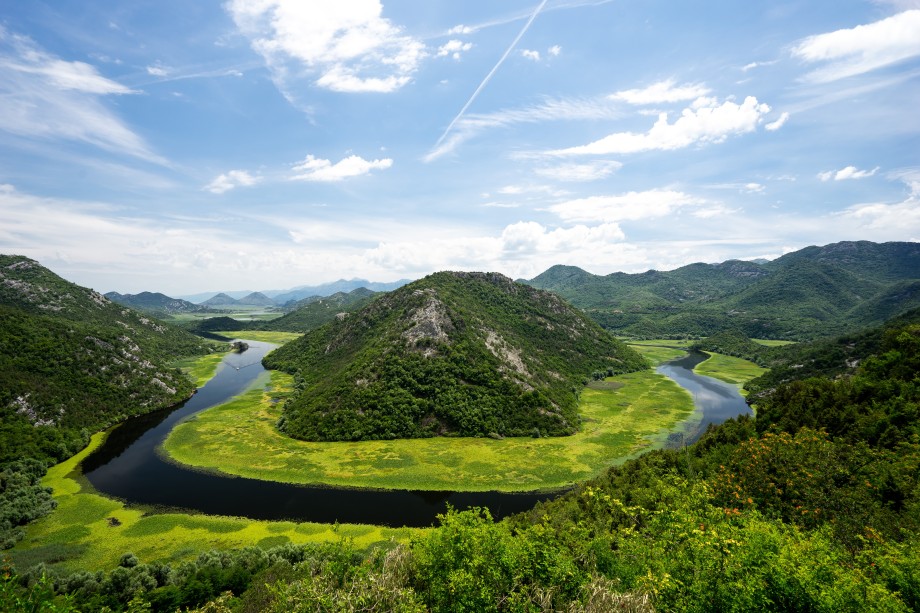 Shkodra, Shkodër or Scutari, or, as most people know it – Skadar Lake is the largest lake in Southern Europe, lying on the border of Montenegro and Albania.

Montenegrin part of the lake of 400 square kilometers represents a national park with remarkable diversity of flora and fauna.

Just one step away from glamourous beaches and crowded capital city, this region is famous for its art of wine-making, specific culinary traits and huge historical importance.

You’ll fall in love with a laid back, simple way of living and unique traits of Skadar Lake region.

Virpazar is a small fisherman village on the coast of Lake Skadar. It is the center of Crmnica, region famous for growing grapes due to its mild climate.

The place used to be a major trading point in Montenegro, with all sorts of local products being transported and sold on its streets. You can still feel the spirit of past days every Friday, when people sell traditional products such as Crmnica wine, grape brandy - loza, olive oil and homemade cheese.

Boat excursions on the Lake Skadar usually start from Virpazar, so you should take advantage of your visit to see the beauties of the lake from the inside as well.

The village is easy to reach due to the railway passing from Podgorica to Bar and roads built for trading purposes, making it a favorite stop of many tourists.

A 15 minute walk uphill from Virpazar will get you to the Bešac Fortress, built in the 15th century to separate Turkish and Montenegrin territory. Nowadays, after undergoing restauration, it serves as a venue for local and international art events and a hospitality spot for tourists from all over the world.

The fortress hosts interesting exhibits articulating the history of the village and its fishing industry. Panoramic view over Virpazar, Lake Skadar and the Montenegrin mountains makes the climb beyond rewarding.

During the 19th and early 20th century, Rijeka Crnojevića was the largest Montenegrin port, while nowadays it represents a place of authentic architecture, wonderful nature and historical significance. It is a place of first pharmacy in Montenegro, first weapons workshop and place where first book on Slavic language was printed. The remains of these historical buildings are still there.

If you decide to spend a couple of days here, you’ll have enough time to rent a kayak and enjoy the voyage through the lake, or take a walk to Skakala and Obodska cave. If you’re coming by car, you’ll easily reach nearby villages  Virpazar, Karuč and Dodoši while enjoying the view of Pavlova strana - the most photographed area of the Skadar Lake.

The cultural and historical significance of the Lake Skadar’s islands is tremendous, creating many legends, mostly from the Ottoman occupation of the country. You’ll see many churches, monasteries and fortresses built on them, standing as a monument to the wars Montenegrin people went through.

Particularly interesting is the story of Grmožur island, known as Montenegrin Alcatraz, on which Montenegrin king Nikola has built a prison fortress. The legend says that neither prisoners nor guards placed on the island knew how to swim, making the escape from it impossible.

Lesendro and Vranjina are symbols of the long fight for Montenegrin independence from the Ottomans, and the fortresses built on them represent exceptionally important historical monuments.

Other islands such as Starčevo, Beška, Kom and Moračnik, with many fortifications, are valuable part of Montenegrin cultural heritage and should be included in your island boat trip – the best way to explore this rich area.

National park Skadar Lake is the largest bird reserve in Europe, with more than half of all the species from the continent. It is also a resting place for birds migrating to North Africa.

Take a bird watching tour by a boat and you’ll get the chance to see Dalmatian Pelican, Pygmy Cormorant, Squacco Heron and many more rare species.

The islands of the lake represent a bird paradise. Grmožur, is known as the bird island, Beška island is a home for wild pigeons and some owls and on Omerova Gorica you can see flocks of storks all over the place.

Towers and platforms built for the purpose of observing birds can be found on the islands for the ultimate birdwatching experience.

The protection of the biological diversity of Skadar Lake is one of the priorities of Montenegro, bearing the title of an Ecological state.

The exceptional fruitfulness of the area makes Skadar Lake unique for its biodiversity which is best explored by getting on a boat with one of the experienced guides.

Throughout the history, people living in this region based their cuisine on the lake’s carp, bleak and eel, as these waters are a home to various fish species. 18 of more than 50 species found on the lake cannot be seen anywhere else on the planet!

Skadar area is a home to many animal species, such as lizards, snakes, otters, weasels, foxes, wild boars and even wolves.

Moreover, this area is a home to more than 25 endangered species of plants, making it quite special. Surface of the lake is covered in water lilies and bamboos, creating an extraordinary visual experience.

Influenced by the East and the West and blessed by the fertile ground, Skadar Lake surroundings have a lot to offer to all gastronomical admirers. Friendly locals will spoil you with shots of homebrew brandy called rakija, warm you up and satisfy your hunger with pršuta (home cured ham), olives and cheese.

A small number of local restaurants spread on the lake coast offers delicious fish specialties, with the distinct flavor given by sage and rosemary picked from the nearby mountains.

Montenegro is well known for its quality wines of distinctive taste which you’ll get to try in one of the small family wineries located around the Skadar Lake.

If you love your wine with a splash of heart and history, hospitable families Mašanović, Janković and Kopitović will bring the authentic experience for you. While tasting on the finest wines and local deserts, you’ll hear the story about the family, the region and its history.

Festival of wine and bleak

Particularly famous product of the area is dry bleak due to its specific taste. Combine it with local wine, and there’s a celebration!

In a traditionally good and happy atmosphere every year visitors from Montenegro and abroad gather in Virpazar to try and buy bleak, homemade wine as well as honey, cheese, fruit and vegetables. This 2-day long celebration usually includes traditional Montenegrin dances, songs and competition about the best poem about the wine.

And did we mention that you get to eat and drink for free?

Lake Skadar national park is a perfect place for a quiet vacation, where you can be close to nature, get familiar to the simple way of living and enjoy the best food you have ever tasted. So what are you waiting for – pick a car and get on the road!